Tommy Sotomayor: Is He a Martyr, His Own Worst Enemy, or Both?

I think this might be the first article that I felt needed a prologue.  This is perhaps the first time that we have published an article about such a serious and contraversial public figure.  Just speaking about Tommy Sotomayor can emotionally charge the average stranger, so if you actually know or are related to him, I can only imagine how you might feel reading this.  While you might feel that you truly know him, and all of the sources gathered in the writing and making of this artilce are false, I hope you at least realise that a person can only go by what they encounter in thier travelings and research.  However, I also want to state that I do not think all of the people lending these sources could be wrong, and that knowing someone can also paint them in a brighter shade.  In any case, I suggest that anyone that has an opinion of the article to comment below.

Commenting is made possible by joining the site.  It is free and is relatively easy.  It also makes you privy to the hidden bonus articles of the site and other benefits.  As always, we encourage that you share and comment on the articles and enjoy your time at All Cool Things™. 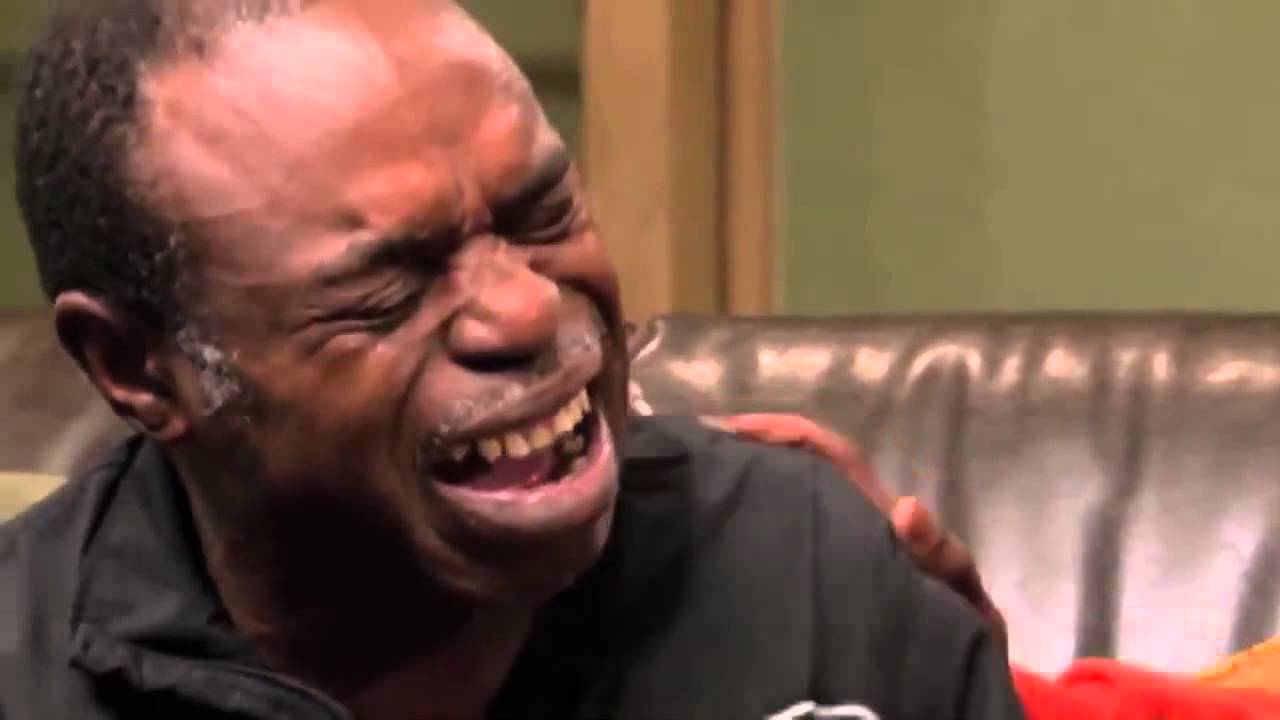 Somebody get Uncle Tom some milk.  He's a widdle cwanky!

I tried to think of something funny or witty for the introduction of this article, but the need to just dive directly into the meat and potatoes of it was way too much of a temptation.  I'll just go ahead and say it:  Tommy Sotomayor is a crybaby.  He's a crybaby and he's hit quite a rough patch.  He lost his "Struggle Mansion" and blamed it all on people flagging him and depriving him of money that he says he should have gotten from YouTube.  He then complained that the same people that deprived him of money started making money off of his name because they make reactionary videos in response to his flagged videos.

Who is Tommy Sotomayor, and why does he feel that he is being stalked and preyed upon?  Tommy Sotomayor is actually Thomas Jerome Harris.  If you looked at his bio, it would say that he is a comedian, actor, producer, and YouTube personality, but I only know of him through his YouTube videos.  He is a critic of the Black Lives Matter movement and USAmerican Black culture in general.  Other than Jesse Lee Peterson, he is the biggest Black critic of Black people, and especially of Black women. 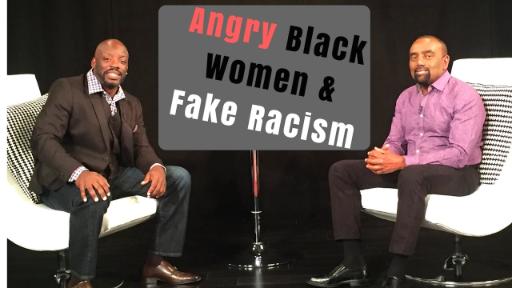 He thinks that Black women are the worst people on the planet.  Calling them BT-1000's, Sotomayor thinks that Black women cause the demise of everyone near to them.  He thinks Black women are nihilistic mothers.  He thinks Black women are disrespectful and controlling.  He has said they are opportunistic and childlike in behaviour.  Tommy Sotomayor also heavily critiques Black women's grooming and use of weaves and wigs, calling them "hair-hatted hooligans." There's a lot more that Sotomayor says about Black women, but I'm going to have to give you the Cliff's Notes description on that.  Describing all of the things he's said is an article or two in itself.  Tommy Sotomayor feels that his mother was not a good mother and that a lot of what he feels about Black women is in direct response to those feelings.  Fueled by these views, Tommy Sotomayor makes videos on YouTube promoting his world views and opinons, while also highlighting events that also support them.

Sotomayor would say that he"reports the news." He does a very good job of setting up background graphics to appear to be behind a news desk.  He also has a decent intro, but there is very little about his "news reports" that are journalistic.  They are heavily emotionally charged and biased.  They are often derogatory and malicious.  They are also heavily ladened with profanity and name calling.  He is unappologetic and his videos insult and offend many people on a daily basis.  So what can go wrong about trying to make a living off of that?

In response to the many videos he posts of that ilk, Tommy Sotomayor has earned many online enemies.  I know.  'Big surprise.  Well, somebody go tell Tommy Sotomayor, because he can't seem to understand why.  His situation actually takes me back to when I was in college and wanted to be a lawyer.  In one of my politiical science classes, my professor explained the difference between implied rights of privacy of a public figure and a private individual.  A public figure cannot expect the same level of privacy or freedom from criticism because he/she puts herself/himself out in the public voluntarily.  Public figures even make a living by sharing their opinions, talents, and even lifestyles, so in a sense, they ARE of the public. 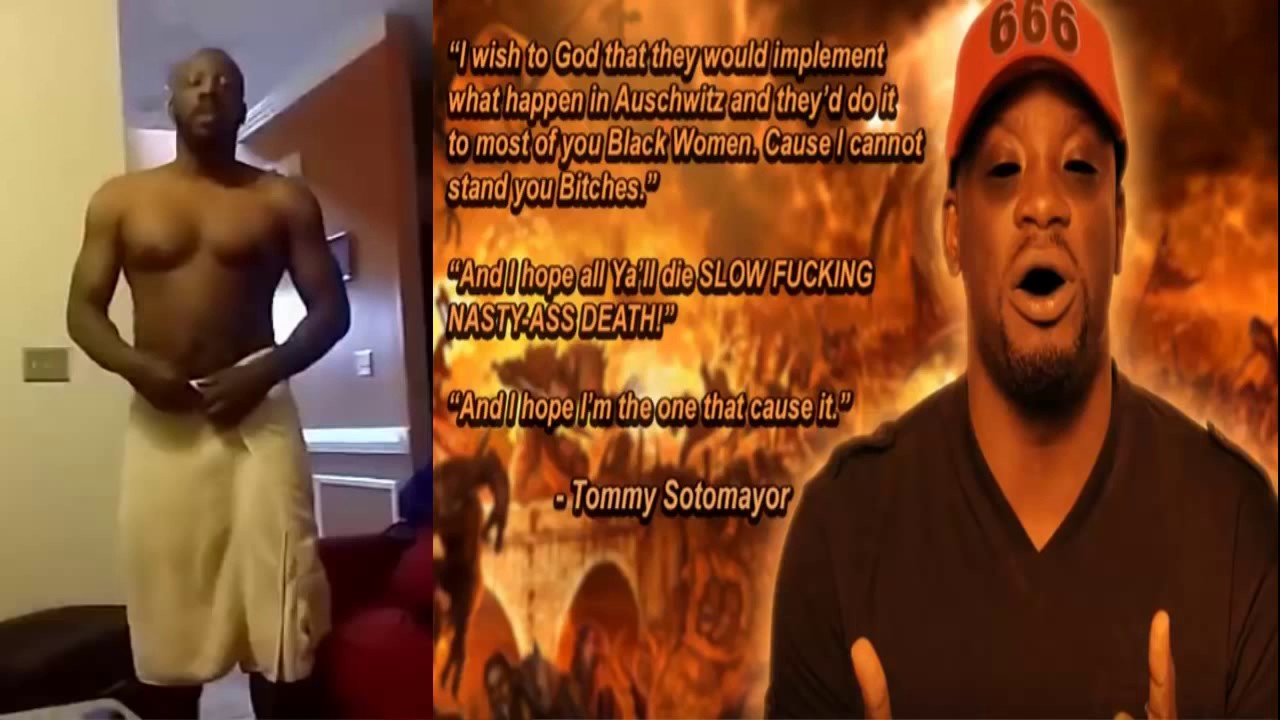 Damn...If he really said this, I can't even make a joke out of this.

Yes, Tommy Sotomayor.  While we do live in a country where you are free to say what you want, and to do a lot of what you want, you are also free to the consequences of those words and actions.  Just like the more you depend on the public for your sustenance, the more you should understand that you reap what you sow.  The internet is a fickle beast, which brings me to another point that I want to make:  living off of YouTube videos is kind of like counting chickens before they hatch.

There's no guaranty that what's hot on YouTube today will be hot tomorrow.  Fellow YouTubers like Logan Paul and PewDiePie could school Tommy Sotomayor on how just a few bad statments and/or actions can totally sink a million dollar social media career.  Tommy Sotomayor was nowhere in their league, and has said and done so much more than both of them combined, some of which has gotten him even criticised as crossing the line as a parent. (Personally, I saw no real problem with the linked clip, but I would have had her put her dress all the way down for the whole clip.) Tommy Sotomayor has at least 7 channels that he depends on to support himself and he talked himself into so many enemies that they flagged him to the point so that he lost enough videos on all of those channels that even they could not pay for his house.  Tommy Sotomayor has become such a hated figure on the internet that he has complained that his haters have also violated a public figure's privacy.

Tommy Sotomayor has complained that he is stalked and hunted.  Sotomayor alledges that his crtics have meddled in his personal life by trying to intefere with his custody and ability to help raise his daughters.  Yeah, 'ironic isn't it?  I think he has two daughters and claims he has no sons, but there are numerous accounts that say otherwise, including one of his exes; he has never been married.  He has said that not only do his crtics seek out his parents, family members, and ex-partners, but they release personal contact information, like their home addresses.  Sotomayor has even claimed that a $2,000.00 bounty has been put on his well-being, payable to the person that beats him within an inch of his life. 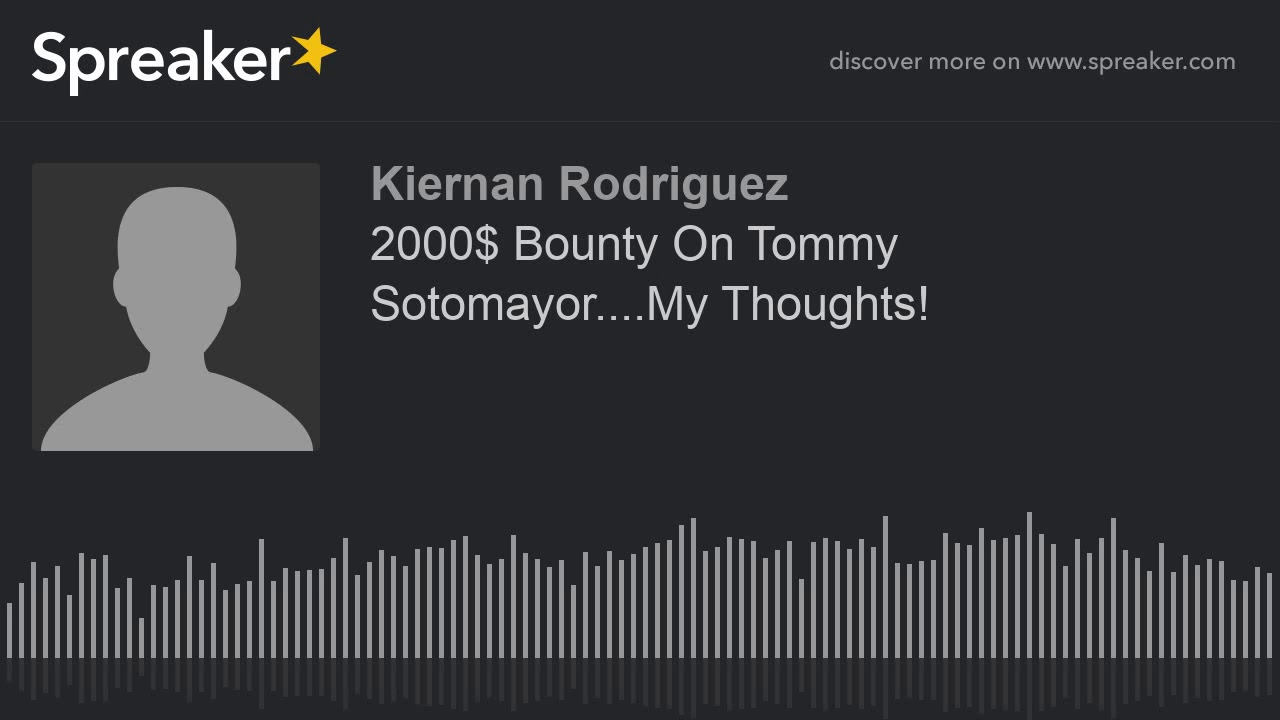 I guess word gets around...

Do I think that people should be putting a bounty out on a person's head or sharing the personal information of him and the ones he loves?  No, I don't, but I think that Mr. Sotomayor is kind of being a hypocrite.  He has been able to make a very successful living off of a lot of hurtful talk as "The King of Controversy," and now that he can't, he's upset.  I don't know if he crossed some invisible line, or people are just tired of hearing what he's got to say, but something happened, and it's not the public's fault.  It's the same public that has allowed Tommy Sotomayor to continue to pay his bills. 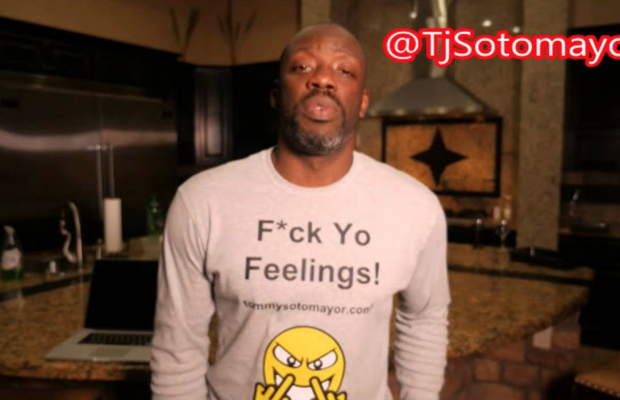 No, tell me how you really feel.

He's also a hypocrite because someone that is so full of piss and vinegar gets upset when people use the same avenues that pay him to punish and reprimand him.  Lately Sotomayor spends a lot of time complaining about how petty his detractors are, and how he tries to help Black people by exposing the errors of our ways, but he doesn't do it in the tone of a teacher or mentor.  He doesn't resport on events like a person that wants to affect a change for the better.  He reminds me of those people that wait for every possible mistake so that they can point and laugh, or say "I told you so." People like him don't want thinigs to get better because he would have no more content to make, and he would have to find some new hustle...or get a job.  (The urge to make a Martin joke was almost unbearable, here.) That would be classier than asking for donations all the time. 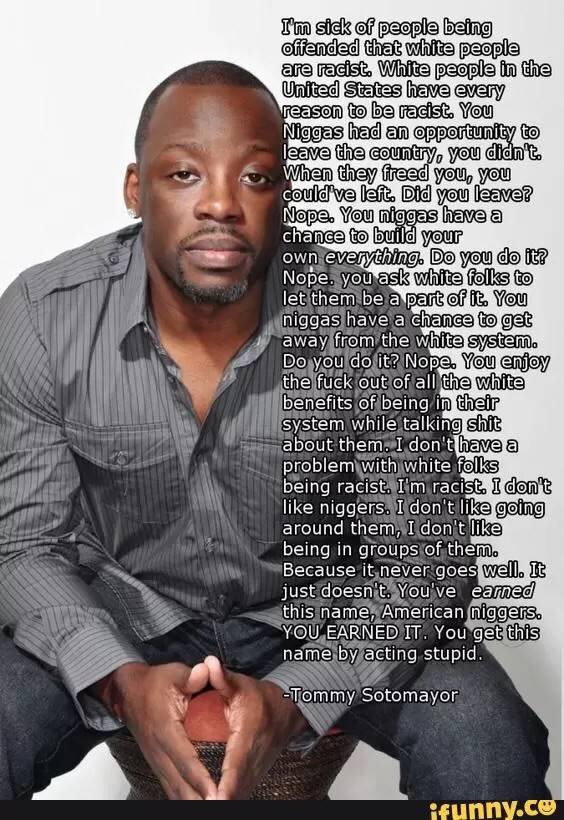 I think Malcolm X and Dead Mike said it best:  "The chickens have come home to roost."

Yup...so I guess Tommy Sotomayor is going to have to change his game and/or attitude.  I have to admit that some of the things he says hit chords of truth, and he complains that people pay more attention to his delivery than his message, but he's a fool to not truly understand the importance of delivery.  Because of delivery, people vote based on passions rather than reason.  Delivery can make a person say that they don't want money and then give it to someone that has more than their fair share.  Delivery elects thieves and murderers into leaders...but I digress.  In the end, a person can only give, say, and do what is in him to do.  Perhaps the answer is to move on.  Maybe Tommy Sotomayor has to grow a little as a person and change his world views so his message changes.  I know for a fact that there are some key issues in his own personal life that he has neglected and could use some attention.

Who knows. Maybe it's too late and the world might be a little tired of Tommy Sotomayor.