Please enjoy the hyperlink ride, as they it will add to the quality and enjoyment of the article! 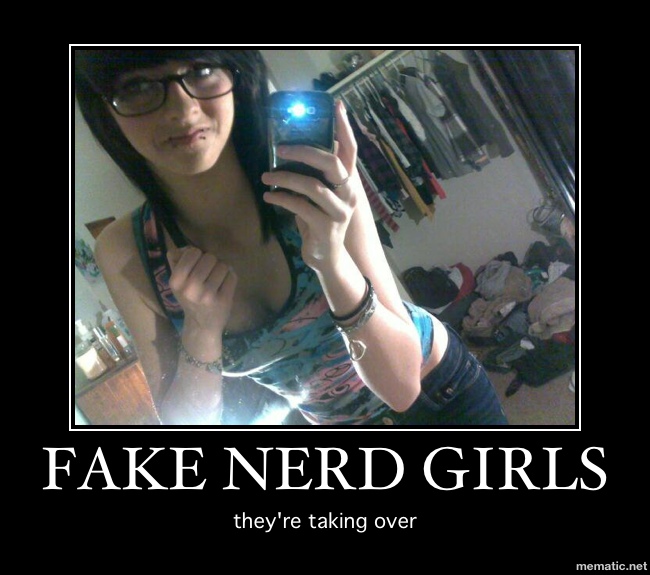 As an otaku, I have enjoyed the female presence that has been increasingly attending otaku, horror, sci-fi, and fantasy conventions. It is nice to actually meet women that consider themselves fellow geeks and gamers, and even better when they come in cosplay to demonstrate their love of the lifestyle and skills in reproducing the wardrobe worn by beloved characters. Seven years ago, cosplaying females were not sparse, but they were not as plentiful as they are now. With that, I have watched a tremendous backlash of anger from otaku and geeks with some of the women that are showing up to the conventions. 'The reason? Many of those cosplayers are considered "fake nerd girls." If you are like most of the people reading this, you are wondering how anyone could take something so seriously, much less get angry about pretty girls showing up to conventions that used to be sausagefests. Shouldn't all the geek guys be happy that ladies are showing up, regardless of if they are fake nerd girls, and what is a fake nerd girl, anyway? Before I get into that, I'll give a little background and perspective.

Geeks and nerds have always been ignored and socially neglected for having "strange" interests and being a socially awkward. In our forced exclusivity, we made our own groups and hobbies centered around our interests. We gave these outlets the same devotion we gave our studies and were likewise made fun of and laughed at for our Star Trek conventions , Dragon*Con, and other groups. Anime and manga lovers were soon thrown into the same company and a strange thing happened: People actually started giving anime a chance and loved it! Anime gave a little more validity to horror, sci-fi, and fantasy because anime and manga is horror, sci-fi, and fantasy; just Japan's preferred medium for it.

Something that was so unknown became popular. Everybody could effortlessly stream anime on their computers when before it was traded and copied with no dub or sub. Referencing Star Wars became funny. Doctor Who became a sex symbol. It became cool to be considered a nerd. If you had $200, you could wear a premade cosplay, and go to a convention to be a celebrity...complete with attention and paparazzi. If you're a sexy female, then you'll probably end up on the internet, too. In fact, there are some women that are paid to make appearances at conventions. For some of us, this is too much.

These conventions were once a safe haven for the socially awkward. Nerds could be accepted and find fellowship. Even though the culture was a forced exclusivity, it was still exclusive and some of us did not know how to handle the exposure and newbies. Many felt angry that some of the girls used the conventions as a means to get attention and be rude to us just like they did in everyday life. Our lifestyle had become a fad, like the goths in the late 90's and 00's. For the first time, nerds felt estranged, invaded, and used in our own sanctum sanctorums. As long as it took for me to explain the this side, my advice on how to react to is so much shorter.

'My advice: Deal with it! Polish your social skills! The price of something we love gaining interest is that all types of people with all varying degrees of devotion will enjoy it. We did not invent the interest, and we don't own it, and even the few that did, realise know that there must be a changing of the guard. There is no Nerd Council that punishes infidel, or Otaku Committee that deems what is true cosplay. There is no entrance exam or trial to demonstrate worthiness to be one of us! You might even find out you have more in common with a "fake nerd girl" than you thought, because you shouldn't judge a book by its cover ('Remember how we complain about that?) Remember that we are still a part of the lifestyle and can still change it or add to it just like anyone else, or even better because we have been in it so long. We can show folks a little bit of how it used to be, or in our true spirit, make our own sub-group of old school enthusiasts.

If that isn't good enough: Nothing trends forever. ..